Your spice rack behind the bar In our July/August issue, we had another look at the bitters and syrups categories. The following is an extract from that feature.

Bitters and syrups are a key element of any good bar or bartender’s repertoire. And while they each provide a different flavour element and sensation, they’re really two sides of the same coin.

“Bitters and syrups are used in cocktails most of the time for similar reasons,” says Group Bars Manager for Applejack Hospitality, Lachy Sturrock. “That is, to bring complex flavours and create somewhat of a balance in a cocktail.”

Joe Fee, fourth generation owner of Fee Brothers, would agree: “Think of bitters and syrups as your ‘spice rack behind the bar’”, he says. “You have taste receptors in your mouth – this is nothing you don’t know. Salty, sour, sweet, bitter; flavour is like setting the equalizer on your stereo. One does not slide down the bass totally, it would kill the full experience of the music. The same is true of beverages – tickling all the taste buds is the important part of experiencing flavour, both in dinner and in cocktails.”

Bitters were originally formulated in the 1700s by physicians and sold as medicinal tonics and remedies for problems with digestion or circulation. To make them go down a bit easier, people started adding a spirit too – and the cocktail was born. Of the numerous bitters companies that were started in this early era, one that still remains is the iconic Angostura.

Tanya Mah, Brand Manager for Angostura at island2island, says that “bitters elevate cocktails by adding depth, flavour, and complexity to a cocktail”.  Of course, classics like the Old Fashioned or Manhattan just wouldn’t be the same without aromatic bitters – it’s an essential ingredient – but Mah also says experimentation is key.

“We encourage bartenders to experiment by adding bitters to even the simplest drinks to see how it transforms the final product into something much more exciting.”

While Angostura has withstood the test of time, and is now ubiquitous in bars worldwide – and has even started to be used by chefs in sauces and marinades – in 2017, there is a wealth of brands nipping at its heels.

“There’s a good range of bitters out there now,” says Sturrock. “The key brands we stock are the old faithfuls from Angostura (aromatic, orange), some of the Fee Brothers range (rhubarb, grapefruit) and the Bittermens range (Xocolatl Mole)”. For those looking to expand their repertoire, Only Bitters, with a popular online shop and storefront ‘The Bitters Lab’ in Fitzroy, is a good place to start, offering over 500 types of cocktail bitters. 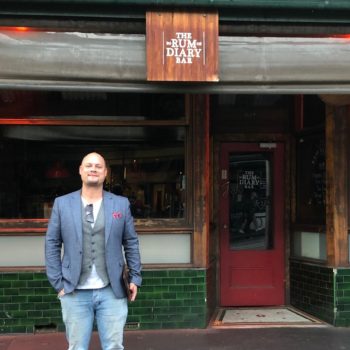 The Bar Business: Up your social media game