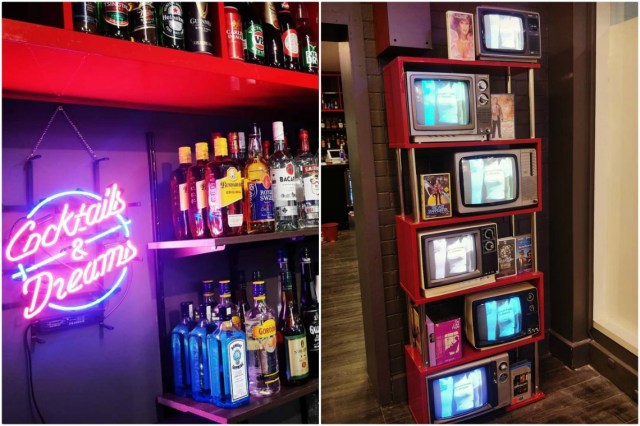 These are certainly strange times we’re living in – compared to this time last year, the industry is operating in a vastly different way.

The pandemic came with restrictions, lockdowns and an array of economic effects, and sadly for a while that meant that we were seeing more bars close than open. But as we slowly start on the long road to recovery, the easing of restrictions in some states has blessed us with exciting new venues and concepts that are finally getting to open their doors for the first time.

One of those new haunts officially launches in Launceston, Tasmania, today – The Arcade Bar. A soft opening in August means the 80s themed small bar has actually been quietly testing the waters for two weeks though, resulting in considerable hype and hope for the future, even in these uncertain times.

Shylie Woods, who co-owns the bar and the actual property where it is located with husband Dr Brad Goldsmith, said while it was a challenge to open a bar during COVID-19, it’s also been a surprisingly positive experience.

“Being open with the COVID requirements is definitely a challenge. We’ve spent time and money on things we wouldn’t have otherwise. Being owners of the property has definitely helped,” Woods told Bars and Clubs.

“Being in Tasmania has helped us not pull the plug. I think if we were in one of the other states it may have been a different story.”

The bar occupies a space in the City Plaza Arcade which was once two retail shops. Having the unique ability as the property owners to combine the two spaces has helped contribute to The Arcade Bar’s ability to house a quieter and a louder side within the same venue, catering to a range of consumer needs.

Preparing a new bar to open is never easy, but the pandemic gave Woods and Goldsmith time to do it themselves, working on creating the bar inside the shops part-time for the last six months. The community and government were all extra supportive during this time as well, which meant good news for the bar and the local area in general.

“We did most of the fit out ourselves, so in the early days of COVID the fact that there were no people out and about meant we could take our time,” Woods said.

“Launceston City Council were extremely supportive from an administrative standpoint. Things went very quickly and smoothly. Sadly, we can’t say that about some of our other Tasmanian developments, but the bar in the CBD was smooth sailing.

“Licensing was also very supportive during the pandemic and refunded fees and the state government provided a small cash grant. All very positive things which resulted in us pressing on with purchases quicker than we might have otherwise. And, since it was Tasmanian cash, we did make a point of buying big ticket items such as fridges and furniture locally. It genuinely made us incorporate earlier than we would have otherwise as well.”

Inside, the Arcade Bar is a true embodiment of the 1980s. Old arcade games like Pinball, Space Invaders and Tetris are available to play for 20 to 50 cents a game, 355 VHS tapes line a wall while multicoloured resin-covered cassette tapes form the bar, above which is neon lit signage. A stack of chunky old TVs show classic Tasmanian ads from the era, alongside a room of framed 80s posters and even more screens playing the decade’s music videos.

Woods said they chose the 80s theme, not only because it was something they knew well in their generation, but also because they had the confidence and resources available to do the theme justice. Goldsmith had an existing love of 80s video games, already owning those that are now in the bar.

Woods said: “We went with what we knew. Plus, there has been such renewed interest in the decade from the younger set.

“Having a pile of old arcades and gear that was easily cobbled together into a theme made it very easy too. You need to offer something that people can’t easily do at home and a pinball and classic arcade are great whopping things that only enthusiasts will put in their loungerooms.”

It’s clearly hit a note with the local population – the Arcade Bar has been experiencing great popularity and demand since the soft opening that has led them to hiring door staff to maintain numbers, turn people away when they reach capacity and make sure excited guests are following all the COVID safe rules.

“It’s been great – you always have that question of ‘will anyone come?’ – and they have. This was only our second week open and we were turning people away as we’d hit capacity. Which is a happy problem to have. Our target market is our age (40s) and up, but the younger demographic has been a huge percentage of our customers to date, which has been surprising,” Woods said.

“The other surprising thing was the arcades themselves. Even at 20 and 50 cents a credit they have been surprisingly popular and are easily covering their own costs for parts and electricity. We thought they would have been basically a draw out of the marketing budget. Instead they could be covering the cost of one staff member.”

As well as consumers Woods said: “The small bar community here in Launceston has been very welcoming, they clearly understand that all boats rise with the tide.”

It’s a tide that the Arcade Bar co-owners are just joining for the first time too, making the early success of the bar all the more sweet.

Before this, Woods and Goldsmith were self-funded retirees who relied on income from rental properties after moving from NSW to an ‘off-the-grid’ Tasmanian property early last year. They joke that they moved from lives in marketing and academics respectively to escape the zombie apocalypse, which you could say came earlier than expected. Woods joked: “We are not preppers but occasionally dress like them.”

As we’ve often seen this year, things can change so quickly, and the ensuing uncertainty is often a catalyst for change. This is why the husband and wife team chose to transform the space into a different type of asset.

“We have chosen to put a business of our own into this property [and] taking a punt on the development application has been a good one, where we have transformed two little shops of modest rent into a decent asset where we could have it be WIWO [walk-in-walk-out] and allow other people to rebrand if they wanted to down the track,” Woods explained.

“Services are the present and future of retail and transforming shops into small bars where the laws allow is a good idea in our humble opinion. Rotating themes in a pop-up bar isn’t a bad idea as I type this. Anyone that does it successfully owes us a boozy lunch.”

The Arcade Bar is open now – for up to date info on their opening hours and whether they’ve hit capacity (again!), check out their Facebook page here. 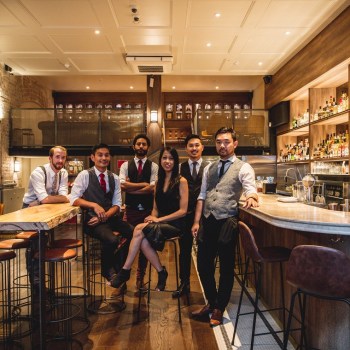 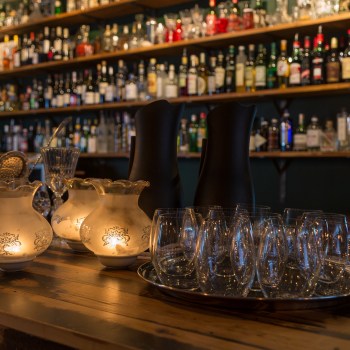 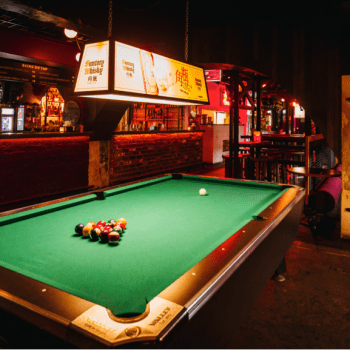