On Tuesday night, Queensland local Joseph Chisholm from Seymour’s Cocktails and Oysters along with Giovanni Moschen from Victoria’s Caffé e Cucina were announced as winners at the Patrón Perfectionist regional finals held in Brisbane.

Joseph stunned judges with his incredible service and the quirky moreish flavour of his ‘The Humble Bee’ cocktail, while Giovanni’s ‘The Calabaza en Tacha’ had a pleasantly surprising flavour inspired by pumpkin gnocchi from his heritage and impressed judges with its vibrant colour and strong presentation.

On Monday night, Harry Saunders from Lobo Plantation in NSW and Holly Ingram from Molly in the ACT succeeded in becoming the first regional winners in the NSW finals.

Harry won over the judges with his infallibly presented cocktail ‘Imperial Essence’, while Holly impressed with her ‘Pollen and Funk’ which was applauded for its smooth and strong flavour notes.

“Both Harry and Holly’s cocktails superbly elevated the tequila to the forefront of the cocktail,” commented Patrón Brand Manager in Australia, Laura Thompson.

“The mix of flavours used complemented the notes of the Patrón Tequila instead of overwhelming them, which is hard to do.”

Joseph Chisholm, Giovanni Moschen, Harry Saunders and Holly Ingram will soon be up against the other four Australian finalists in Melbourne in October and potentially the seventeen international finalists, in pursuit of winning the global title at the Global Finals in Mexico in 2018 – following in the footsteps of previous global winner, Mike McGinty of Edinburgh’s Voyage of Buck.

Freeze dried honeycomb with lemon oil and lavender smoke for garnish. Toast oats in a pan and then add Rinquinquin and steep for 20 minutes, strain off and use.

Shaken with ice and fine strained into a Nic and Nora or coupe. Garnish with a lemon twist. 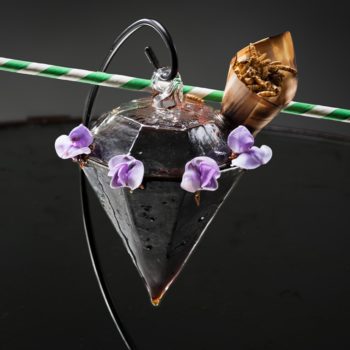