Sustainability is something that’s been gaining increasing traction in the industry recently. Producers are more and more aware of their environmental footprint and are striving to make it smaller.

Adelaide Hills Distillery is one brand that holds this strong commitment to the environment. Bars & Clubs spoke to the distillery’s Founder, Sacha La Forgia about being sustainable, and the unique opportunities provided by the Australian eco-system.

“As sustainability is sort of built into industry, it makes it easier and more accessible,” La Forgia said.

Adopting environmental techniques now is more commercially viable than ever before, but it wasn’t always this easy.

“When we installed 1700 square meters of solar panel to power the distillery that was quite expensive. But we did that three years ago. Now, because it’s been adopted more widely, that would be cheaper,” said La Forgia.

Such investment worked out in the long run though, with the distillery often putting power back into the grid from their solar panels. It’s one example of the “closed loop” that happens in the Adelaide Hills Distillery’s eco-system. But La Forgia said they weren’t aware of the term before they started.

“We weren’t really aware of ‘closed loop,’ we were just doing what we thought was right. When we built from scratch our whole facility, we could build these things into it,” he said.

This facility is an eco-system that sits on an 84 hectare property in Hay Valley, South Australia, called Lot 100. It also houses the production site of craft beer brewer Mismatch Brewing, with a cellar door for other local brands like The Hills Cider Company, Ashton Valley Fresh and Vinteloper. There’s also a restaurant with a ‘paddock to plate ethos’ run by Adelaide icons Tom Bubner and Shannon Fleming.

The site has a holistic approach to sustainability, with processes based heavily around reusing and recycling. Most notable is that they have zero water waste, thanks to bore water.

“We take bore water, run it through our water treatment shed, it gets reverse osmosis filtered back to pure water… And that’s what we have available in production,” explains La Forgia.

“Then any water that goes down the drain goes back to our waste watershed and is brought back to irrigation quality water, which is then used to irrigate the crops around the distillery. So the only water that is wasted is what leaves the distillery in a bottle, which is still consumed, so it’s not really wasted.”

With the creation of their new whisky, made from native Australian wattle seed, Adelaide Hills Distillery discovered a different type of waste that they integrated into their closed loop.

La Forgia said: “The biggest waste stream from a whiskey production is spent barley malts. That’s all collected and fed to the cows on the property. And then the cows are used in the restaurant.”

Using wattle seed to create the Adelaide Hills Distillery Native Grain Whisky is an example of another sustainable practice that the distillery uses, sourcing materials and ingredients from the local Australian environment. The seed is among a range of native botanicals and even green ants that are present in the distillery’s creations.

Opting for uniquely Australian infusions and ingredients is not only sustainable, but also gives products an edge in the market, winning several awards around the world. It could be the reason the whisky’s first run sold out so quickly this year.

“From an international perspective, the one thing that we have unique to us in Australia is our foods,” La Forgia said.

“Our strength is using what is around us what grows easily to create flavours that the rest of the world just haven’t seen and don’t have access to.”

Through a recent road trip from Adelaide to Uluru, La Forgia said he realised just how much opportunity that native Australian ingredients could offer.

“I’ve never done that before, I’ve never driven through the middle of Australia. And my perception was that it was an arid desert with nothing, but it’s incredible how much life there is in the desert,” he said.

“There’s food everywhere, it’s basically a super market, you just need to know where to look… the vast majority of land in Australia is the middle of the country and we only live on the very edge of it. There’s actually a lot of opportunity out there.”

With so many ingredients to play with, the distillery “always has stuff on the boil.” But high quality standards mean they don’t release new products all the time, making it all the more special when they do.

Last week was one of these special times, seeing the release of a new 78 Degrees Gin called Desert Strength. It’s only the third core gin product in Adelaide Hills Distillery’s five years of operation.

“We’re sort of evolution not revolution, and we focus on quality. So we’ll take our time to release something and make sure it’s perfect. We’ll only release it if it’s really good,” La Forgia said.

He describes Desert Strength as “really delicious. Again, it builds on what’s come before and brings it into a quality perspective. It builds in those Australian flavours that are so unique to us.”

Released at Sydney’s Fever Tree Gin and Tonic Festival last week, it will be available to purchase soon. 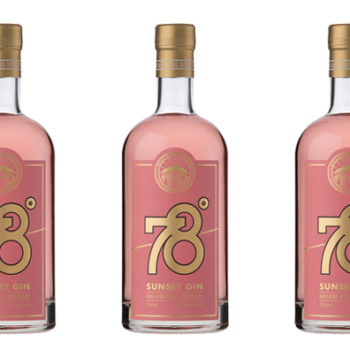