Bourbon and beyond: the American whiskey juggernaut Exciting, creatively limitless and growing, the American whiskey freight train shows no signs of slowing down – and you don’t have to look far to find local bars making the most of it. In this feature from BARS&clubs Winter (republished in two parts for Whisky Month), we take a closer look at the growing influence of this booming category.

With American whiskey proving such a hit with the Aussie barfly in recent years, it’s no wonder that the number of bars with a Yankee focus (or at least an expanding U.S. whiskey collection) has grown too.

To name a few frontrunners, The Gresham’s whiskey list continues to impress; Kittyhawk’s focus on rye is still proving a hit; and, on the west coast, Varnish on King in Perth boasts a staggering number of American whiskies, breaking it down on their menu state-by-state – from the powerhouses of Kentucky and Tennessee to the relative minnows of Indiana and Utah.

However, one venue that has taken this focus on Americana to the next level is NOLA in Sydney, a bar and restaurant that champions the cuisine of the South alongside a staggeringly large, nearly 600-strong collection of American whiskies.

“I always felt that bourbon and the wider category of American whiskey wasn’t represented to the degree that it deserves,” NOLA owner Pete Fischer told BARS&clubs. “Something like NOLA hadn’t really been done in Sydney or Australia to the level that Baxter Inn or Boilermaker House has done with Scotch. But, just as much effort goes in to producing this spirit as it does the others, and it’s got an amazing history – going through Prohibition and other setbacks – and a great story to tell.”

One way that NOLA tell this story to customers is through its whiskey flights, which range from a $40 bourbon flight (Elijah Craig Small Batch, Bulleit 10YO, Makers 46, Russell’s Reserve Single Barrel) to a unique, $130 Seven Stills flight (a San Francisco brewery and distillery famous for distilling with various styles of beer). But it’s the rye flights that are going gangbusters at the moment – “I think the approachability and flavour that rye brings to cocktails is something that helping drive that,” Fischer says.

A few streets over at Grain bar in The Rocks, manager Roderick Boerma also believes that rye is making big comeback, telling BARS&clubs:  “All the bartenders love making Old Fashioneds with rye whiskies, as they keep all the flavours there! Trends show that all brands are starting to focus on a rye product in their range, even Jack Daniels.”

It’s business as usual at Grain in terms of the classics, with Boerma naming the Manhattan, Old Fashioned and Sazerac as some of the bar’s top sellers. For Manhattans, Boerma reaches for the Michters Straight Rye, balancing it out with Mancino Rosso and two “confident” dashes of Angostura bitters – finished off with a home-made brandy cherry.

At NOLA, the cocktail menu has been stripped back to around 12 cocktails, and now has a strong focus on rye. Alongside the ever-faithful Old Fashioneds and Manhattans, Fischer says the Boulevardier and the Sazerac (made using 100% rye – no cognac – and a top shelf, 6-year old Sazerac) are also selling very well, as well as other New Orleans classics like the Vieux Carre.

The rise of American whiskey’s popularity in Australia is also reflected in the data. According to Robert Maron, Director of International Affairs at the Distilled Spirits Council of the United States (DISCUS) – which recently participated at the Drinks Industry Show in Sydney, showing off new, boutique U.S. products – exports from the U.S. to Australia are on an upward swing.

And the numbers back this up: “Last year, U.S. spirits exports to Australia were valued at $127 million, up 12% as compared with 2016, and in 2017 American whiskey accounted for approximately 80% of this total in terms of value,” Maron adds.

A cursory glance at the data from the recent San Francisco World Spirits Competition also provides evidence of a boom time for American whiskey: the number of bourbon entries were up by 60%, while rye also recorded a solid 20% increase when compared to 2017. Bourbon and beyond: part two 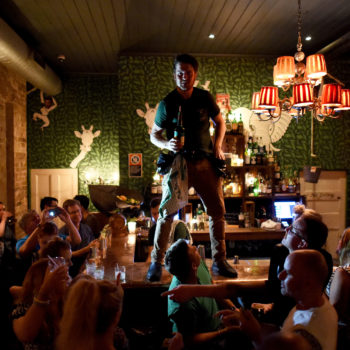