Buzzing Surry Hills Irish bar The Wild Rover can certainly claim to know a thing or two about Irish whiskey. With a whisk(e)y list that extends into the hundreds, the Irish category has earnt itself a sizeable chunk of the backbar, closely rivalling the bar’s Scotch offering.

According to Kim McDiarmid, business development & marketing manager for Liquid and Larder (which owns The Wild Rover), the main calling card for Irish whiskey is its approachability. “Irish whiskey is extremely approachable and what I would describe as an ‘all occasion whiskey’,” he says. ”We’ve had loads of beginner whiskey drinker customers visit the bar over the years who wanted to learn more and embark on a journey tasting whiskey from all over the world.

“Their introduction was always with Irish whiskey because we know if we had slid a peated Scotch under their nose, they probably wouldn’t be interested in trying others.”

In terms of cocktails, an Irish Penicillin has been a staple on the drinks list since the early days of the Rover, swapping out blended Scotch for Irish whiskey – and maintaining the sweet, sour, spicy and smoky element of the contemporary classic.

So how does the bar team at The Wild Rover go about curating its Irish whiskey list? McDiarmid says it’s a case of “more the merrier, provided they fit on the shelf!”

“Giving customers the ability to try something new each time they walk into the bar is important but we won’t add booze to the bar unless people will enjoy it,” he explains. “We tend to lean towards stocking new products from brands that have supported us with trainings and tastings for our customers over the years but the biggest factor – our customers – decide what we get in.

“We are really lucky to have a mix of whiskey guru customers who suggest what we should get in and beginner whiskey drinkers who are curious enough to try them.”

McDiarmid also recommends upselling guests from the Irish whiskey house pour to more premium offerings, and not only if they’re enjoying them neat. “We also serve hundreds of Old Fashioneds each week so upselling them to a cocktail that doesn’t ruin the nuances of the whiskey is an upsell that benefits both the bar and consumer.”

Another interesting aspect of The Wild Rover’s offering is its whiskey club The Whiskey Co-Op, hosting a free monthly tasting for members – thanks to the support of the Irish whiskey community.

“We’ve had so many brands give up their time and whiskey that we’re very appreciative of: Hyde, Jameson, Connemara, Redbreast, Jack Ryan, Glendalough, The Irishman, Writers Tears, Bushmills, and we even had Jack Teeling (founder of Teeling Whiskey) do a session a couple of months ago.

“We are really excited about Irish Whiskey full stop,” McDiarmid adds. “When the Rover opened five years ago, there weren’t nearly as many brands available on our shores compared to these days, especially experimental whiskeys being made.”

As the Wild Rover proves, there’s never been a better time to invest in a bit more Irish whiskey at your bar. 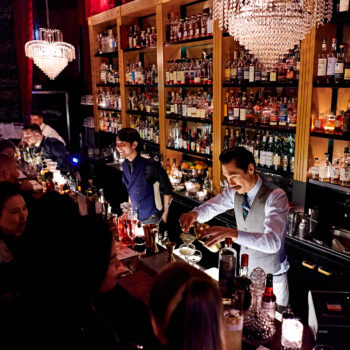