It’s pretty hard to argue against Melbourne in February last year as being one of the worst possible times to open a new bar, but that’s what Adam Betts at the team and Bonny did – obviously unaware of what was about to be unloaded on them.

Three shutdowns later, the team is thankfully now enjoying its longest run of being open and is getting to enjoy the things they wanted to do when they opened the bar 14 months ago.

“Things are going great now, we’re starting to build up a solid customer base, we’ve got loyal customers coming in now and the bars starting to come on as we had originally planned.

“We’re entering our next phase now with the kitchen and new art installation, so really keeping the ball rolling, which is great.”

That kitchen phase has seen famed Melbourne chef Teage Ezard take up a three-month residency at Bonny, with his GingerGirl pop-up offering pan-Asian, hawker style street food. In addition Bonny is also supporting local artists during the three-month pop-up with new art installations, with bright and vivid contemporary canvas works by Richmond based creatives Pour AF. Pieces can be purchased off the wall, with all proceeds going direct to the artist.

Now as these elements start to drop into place and the bar cements its spot in Fitzroy, Adam is beginning to feel hopeful about the future.

“But from the general bar-business sense, just being able to have been open since mid-November has allowed us to start building momentum, whereas stop-starting four times in one year and being a brand new bar, it’s hard to build-up regular customers. But being optimistic, each month we are growing and growing and we’re pretty optimistic that we’re at a point now, where from here on we are here to stay and we’ll keep growing.”

One of the key elements of Bonny is to be a bar that champions sustainability in every possible way, and a crucial aspect of its waste reduction is the 27 taps that it uses for its drinks. Having been open long enough now the team has its taps set-up as it wants now with 12 taps for cocktails, seven for wine, six beer taps and one each for sake and cold brew coffee.

Betts said another way the bar has worked to increase its sustainability has been to own its own stainless steel kegs, which they can send to wineries, who don’t normally keg wines. This means they can put wine on tap that isn’t normally available in keg and helps with offering different sized servings to customers.

“We were a bit worried about what the perception might be about having wine and cocktails on-tap, but it hasn’t been an issue for us at all. The hardest part for us has been finding good wines that were available in keg, because obviously not a lot of wineries are kegging.

“So that’s why, by default really, rather than trying to find wine in keg or wine that was in one-way plastic keg, it’s not great using plastic when you are trying to be sustainable, so we took it upon ourselves to purchase our own steel kegs.

“We can now approach wineries who don’t normally keg, we sanitise and deliver our own kegs to them and get them to fill those. It’s awesome for us because we get some amazing wineries that no-one else in Australia has on-tap. It’s also great from a sustainability point because we’re re-using stainless steel kegs with no bottle wastage.

“It’s a lot better for the wine as well because there’s no oxygen contact and it’s all under gas. We’ve been really surprised how well people are taking to it and it allows us to pour different sizes as well. So rather than just being 750ml bottles, we do a lot by the glass, but also 500ml and one-litre carafes, and people are really flocking to that particularly if they are a table of four and they are having some food.”

Although the wine is popular, Betts said it is the cocktail on tap which are proving to be the biggest sellers in the venues.

He told Bars and Clubs: “All our cocktails are based on signature cocktails that just have a slight twist to them. That twist can change with each keg, but the Negroni tap is definitely always one of our most popular.

“We might do a hopped Negroni, where we’ve infused hop into the spirit, and we might do a white Negroni in the next keg, so there is always that little twist. But again with our food, the Negroni tap is very popular.”

So with a very tough first year behind, and confidence growing about the future, Bonny and its team look well poised to be a long, sustainable part of Fitzroy’s bar scene, and look out for some more exciting chefs setting up residency in the future. 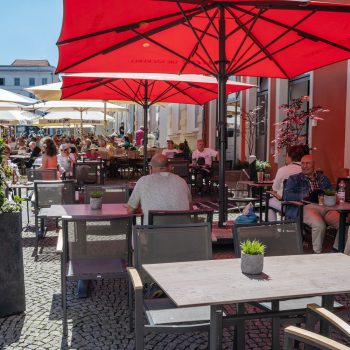 Restrictions on outdoor dining and music performances eased in NSW