After three and a half years as an ambassador at Bacardi, Pete Hollands recently returned to his roots at The Gresham in Brisbane as their new General Manager.

Bars and Clubs caught up with Hollands once he had had some time to settle back into bar life, to hear about how the new role and 2020 has been treating him.

Reflecting on his time at Bacardi and his journey to return to The Gresham, Hollands said it’s been a good news story for him, a positive part of a really dark year for the industry. The opportunities he had at Bacardi let him take his career down the path he was looking for, but also helped him realise what it was about the industry that he loved as a whole.

“I’ve got nothing but good things to say about Bacardi, for helping me to develop and move in the direction I wanted to go,” Hollands said.

But as the pandemic hit and this direction morphed into a desk job, Hollands thought: “Actually, I need to be out seeing people, I have to still be in hospitality… it sort of was an ‘aha’ moment, like, actually it’s bartending that makes me happy.”

“I had what a lot of people would say was a dream gig, working for a great company like Bacardi as National Advocacy Manager, with all the travelling and fun events and stuff, but besides that, if I wanted to continue I’d have to go to a desk job and that wasn’t for me. I had to go back to hospitality.”

Hollands said that many people are usually pushing the other way in the industry, to move away from some of the negative points of bartending like the late night hours. But for him, the positives outweigh any potential negatives.

“A lot of bartenders will try and get away from bartending will move on from the late nights and sometimes a few of the negative culture points of hospitality, but for me, if you keep your shit together, it’s a really good place to be,” Hollands said.

“And becoming a Brand Ambassador isn’t the end goal, it shouldn’t be the end goal. For some people, in the end it’ll be very successful. But for others, there’s nothing wrong with being a humble bartender.”

Opportunities in the industry come in many forms, but Hollands said the most important route is one that makes you happy and is something you actually want to do. For example, he noted how some brand ambassadors have embraced the changes of the pandemic to do amazing things virtually, like Bacardi’s Georgie Mann and her video series.

Hollands’ time as a brand ambassador also taught him valuable things that he has brought back into The Gresham, along with other customer insights he brings from being a regular there for the past four years.

“At a venue that is very capable with great bartenders, a great whisky selection, great cocktail list and great team – the biggest thing I’ll bring that I don’t see many people talking about, is about culture and leadership, and how we as a team, know what we want to achieve and how we’re going to do it,” Hollands explained.

“I think a lot of venues have good culture, but not many people talk about it… I had my first kickoff meeting with the team last Tuesday, and we had a little roundtable and decided what we wanted our culture to be, which is precision without pretense. So we want to be a great Aussie pub but with everything you could possibly want. Nice and casual service and everything just done well.”

“Talking about culture fixes a lot of problems so you don’t have to deal with them specifically. Like challenging each other to make sure the drinks are high quality, being able to have strong feedback, doing good closes so the next team doesn’t have to pick up the pieces for you. Talking about culture and leadership is something that I’m really going to take from my time with Bacardi to my time with The Gresham.”

There are still things Hollands will miss about being a brand ambassador, namely the people he worked with and other elements that aren’t really part of the job during the pandemic (like travelling and events). 2020 has also been a moment to reflect on what makes you happy, and that’s been a big learning moment for him.

Hollands said lockdown has taught him to: “Be happy to be be at work and behind the bar serving customers. You look at everyone in Melbourne absolutely chomping at the bit to just get behind a bar and make a Mojito for a punter, we’ve just got to be happy to be back at work because not everyone is as lucky as us up here in Brisbane.

“And I suppose to me personally, that was a big learning for me – I was my happiest serving customers… I can be on the floor all day every day. That’s my happy place.”

Header image: A throwback to Hollands’ first stint at The Gresham, from The Gresham social media. 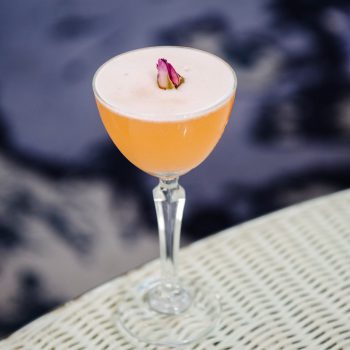