One of the pioneers of Australia’s booming small bar scene, Tim Philips-Johansson is set to leave the country, heading to Europe to take up a new role as Global Brand Ambassador for Johnnie Walker.

Speaking to Bars and Clubs, Tim said that while a brand ambassador role was not really something he had ever considered, when this opportunity came up, it felt like a dream offer.

“It’s been an exciting period for us, obviously a tough couple of months with the closing of Bulletin Place, but this role has been on the horizon for a while so it’s always been like the pot of gold at the end of the rainbow.

“It was over a year-and-a-half ago that I first started speaking to people about the role, and in true big corporation style, these things seem to take a lifetime to really get anywhere. We reached a point pre-pandemic where it was looking more likely than not, and then the role was shut down for 14-15 months, before a couple of months ago they re-approached me and asked if I was still interested.

“As someone as who has never been a brand ambassador, I’ve never had anything against brand ambassadors, but I just always thought to myself if I was going to do, I wanted to do it with conviction and obviously do it for a brand that I was inspired by and passionate about and be able to talk about in a full-time capacity.

“Johnnie Walker to me is the flagship brand of the Diageo portfolio, as a Scotch drinker my whole life I’ve always had a lot of respect for, so it was a dream offer.”

He added: “It’s the kind of role that you can look back on at the end of your working life and it certainly stands out as a bit of a watershed moment in someone’s career.

“It’s the world’s biggest whisky and it’s a brand that is on the back bars of every single bar in the world in some capacity and it’s probably in the liquor cabinets of most people at home. What I’ve come on board to do is really help to re-engage the brand with the trade a little bit.

“Scotch is a much historically maligned cocktail ingredient. Scotch in general has this unfair pigeon-holed expectation that it’s not to be messed with, so helping pair Scotch again with cocktail bars and showing them its flexibility and its versatility and just how malleable it can be, is exciting. And obviously within the portfolio of Johnnie Walker there’s a lot of great options there.”

Tim explained to Bars and Clubs that while bartenders and evolved cocktail creations as the gin category has developed and understood that different cocktails will require a different style of gin, that development has really happened with Scotch cocktails.

“As big as the breadth of flavour is in Scotch, we haven’t really got to the same point [as we have with gin]. It’s very much this cocktail has 50mls of Scotch in it and it generally falls to whatever house Scotch sits in the speed rail.

“So I’m really excited to help be the conduit and also be the soapbox for bartenders to be able to talk about and be confident with using Scotch again in cocktails.

“It’s unfortunate that the only sort of cocktail that tends to be ordered in bars any more is from Australia’s second most famous bartending import, Sam Ross, and the Penicillin, and credit where it’s due and as delicious as the Penicillin is you wouldn’t be able to make that drink with any other spirit category.”

Tim obviously won Diageo World Class in 2012, and he said that association did play a big part in his decision to take on this role.

“Absolutely it did. I’ve always been super loyal to Diageo, because ultimately they gave me a really great opportunity with competing in and winning World Class. Everyone I’ve ever dealt with at Diageo it’s been a really genuine interaction and, I’d say this if I was in this job or not, but I’ve always really respected its portfolio of booze.

“I won’t say I’m a closet Baileys lover, because I’m fairly open about my Bailey consumption and love, so everything there is good, they come from the right place and the company culture is phenomenal so it ticked every single box and there really was no hesitation from us.”

Tim heads over to Amsterdam in a month to take on the new role with Dead Ringer being run by his business partners and Vanguard Luxury Brands looking after the distribution of Rhubi, with a brand ambassador appointment in the pipeline.

Bars and Clubs would like to say thanks to Tim for everything he has done for this title and for Australia’s bar scene, good luck in the new role mate, hope it goes well. 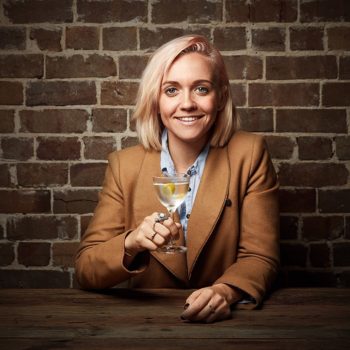