Fourth lockdown puts Sixty Smith on the brink of closure Sixty Smith is on the verge of permanently closing after facing its fourth COVID-19 lockdown since opening last year.

Co-owner Sam Silva said each time the bar has been forced closed it has taken a hit financially and in reputation, with the most recent Victorina government restrictions putting yet another dent in the business’ success.

“We originally thought it was only going to be one week and after it was announced that it was extended we’ve been worried and have started hoping that we can open on Thursday. If it goes on for another week or two we might not come back,” Sam told Bars and Clubs yesterday.

“We still have to pay the rent and everything else so it just keeps adding up. We just started to get our heads up and this happened again. So it’s not going to be easy catching up with all our bills.”

Bars and Clubs caught up with Sam and co-owner Indy Weerakoon earlier this year as Sixty Smith was finally lodging high levels of foot traffic and bringing in consistent trade after the third lockdown.

Sam said despite previous adversity in the last 18 months, the biggest problem has been regaining momentum in trade each time it has had to reopen.

He said: “When you open a business and close it like we have had to, it takes at least a month and a half or two to come back again to same level as we were prior.

“And in that two months you’re gonna lose so much money in addition to what you lose from when you’re shut down. It’s just not viable enough to come back so hopefully we can open again on Thursday and not close our doors again.”

After the fourth Victorian lockdown earlier this month, the state government announced funding of a Circuit Breaker Business Support Package, which now offers grants of up to $5000 for eligible businesses, plus a new round of the Licensed Hospitality Venue Fund that also provides businesses holding an eligible liquor licence and food certificate with a $7000 grant per premises.

However, Sam said more financial support is needed to prevent future permanent closures across Melbourne: “At the least we will need rent relief or something else to come back again because this time there has not been enough, no job keeper, nothing.

“We have eight full timers that I have to carry and I can’t lose them too because when we come back we need staff. Especially when you reopen you want to have the good staff that we have so we want to keep them, but the government giving $7000 is just nothing. You can’t even pay the weekly wages from that so it’s a very bad situation at the moment.”

He added Sixty Smith isn’t alone: “I mean it’s not just me, I talk to lots of people and last lockdown a lot of businesses had to shut down. This is going to be the case again.”

Sam said in addition to better financial assistance in order to prevent future business closures, a more efficient QR coding system needs to be instituted by the Victorian government to prevent further lockdowns.

He explained: “With this QR system the government told us four weeks ago that the system we were using was not valid. And it took them 10 months to tell us that. That doesn’t make any sense to me.

“I’ve been to Queensland and New South Wales and their QR coding system works perfectly and here everyone thought they were doing the right thing. So now they want us to use the Victorian Government QR system and that’s where things go wrong here.”

While many hospitality businesses have been able to utilise takeaway food and beverage to subsidise trade while their doors are closed, delivery or takeaway is unfortunately not an option for Sixty Smith and many small businesses who rely on word of mouth and repeat customers to drive trade.

Sam explained: “When we use takeaway apps like Uber, it prioritises options that are the most popular, however, when you start doing takeaway and Uber you’re not going to get any hits because it depends on your transactions and ratings. So by the time someone new comes along, especially one that doesn’t have a big name already, it can take longer than a month or two to be busy.

“So by the time we start getting traction it would be when we are open again and we would have wasted more money and would still have to come back from square one.”

Despite facing yet another round of set backs to Sixty Smith, the enthusiastic owners are strategising to drive the bar’s brand in the initial stages of reopening, ensuring it can continue to support its staff.

“We are going to go crazy with the marketing side. What else are you going to do? we’ve done everything right to bring back the business but we just have to keep doing it,” Sam said.

“We’ve got about six university students and backpackers, they’re our workforce and we need them to run the business. So if I don’t look after them they will leave the industry or country. So all businesses need to value their staff and take care of them.”

While there is hope that Melbourne will re-open on Thursday night, bars in the city are still in need of support, find out how you can help. Have your say on the future of Sydney’s liquor laws 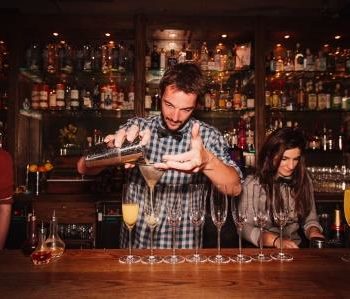