When Bonny opened its doors in February last year owners Adam Betts, Michelle Vanspall and Shayne Dixon had the philosophy to create a bar that would marry amazing drinks and dining in one venue.

The team has endured three lockdowns in the short time it has been open, but the kitchen they built, which was designed to house Melbourne’s best chefs, is set to welcome famed chef Teage Ezard and crew for a three-month residency.

Having already teamed up with high calibre chefs such as Mike Baker (Henry Sugar, ex El Celler De Can Roca), Peter Gun (Ides, ex Attica) and Andrea Serreli (ex Trattoria Emilia and Grossi Florentino), it comes as no surprise Bonny has teamed up with a superstar for its next instalment.

Teage’s menu at Bonny’s will draw inspiration from his long-standing Melbourne institution Gingerboy, and the kitchen will take the name of Gingergirl, previously seen as a highly successful pop up at The Star in Sydney and last summer at Sorrento’s Ocean Beach Pavilion.

What you can expect from the Gingergirl menu is pan-Asian, hawker-style street food designed with Bonny’s layout in mind. It’s a place where you’ll equally be at home pulling up a bar stool and snacking, chatting with your cocktail bartender and peering into the open kitchen, or sharing more substantial dishes with friends, dining on the reclaimed high tables.

To match the food the team has come up with a range of bespoke signature cocktails natural wine and craft beer from Bonny’s 27 taps, or house made sodas, nitro cold brew coffee and complimentary sparkling water as the non-alcoholic offerings.

While bookings are highly recommended to dine inside (via bonnybar.com.au), Bonny will be leaving its al fresco heated footpath and recently opened back beer garden open for walk-ins.

Bonny is also supporting local artists during the three-month pop-up with new art installations, with bright and vivid contemporary canvas works by Richmond based creatives Pour AF. Pieces can be purchased off the wall, with all proceeds going direct to the artist. 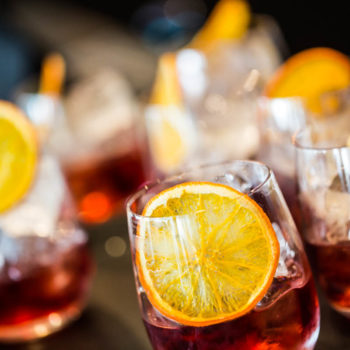