Did you know that one brand is currently the Best in Show gin according to the 2020 Australian Gin Awards; the World Gin Awards’ Best Navy Gin and also Gold Medal winner at the same awards for World’s Best Contemporary Style Gin?

It’s an impressive catalogue of awards for any gin, let alone one that has been developed on a shoestring by a husband and wife team with friends and family telling them which recipe iterations they enjoyed the most.

Meet hospitality veterans Felix Clark and Corinna Kovner, the couple who are behind Ester, the Australian gin brand making waves on the global scale – awards-wise at least, as Felix explained to Bars and Clubs.

“Our sales in the first six months are not commensurate with the industry recognition for the gin and certainly the two big awards that we’ve won.”

But Corinna adds: “We haven’t really focused on it though. With that first award we won at the Australian Gin Awards, we had no website, no Instagram, no-one had heard of us. So it was quite a good kick for us, because everyone was just like ‘who the fuck are you guys?’”

It was a rapid rise to success, with Ester launching in June with its Dry Gin and Strong Gin and then the Australian Gin Awards took place in August. The Strong Gin won join Best in Show alongside Never Never’s Southern Strength Gin.

And although it has been a rapid rise to success, it’s fair to say it’s not been an overnight success for the pair, with Felix saying he started distilling around six or seven years ago.

He added: “It has just been so refreshing that this thing that we crafted for ourselves in the back of the house, I kept pushing gin across the table and Corinna kept pushing it back saying ‘that was a bit closer’ or ‘I love that one’. So to then go to market and get all these accolades been incredible.”

Felix told Bars and Clubs how it all began: “About six years ago me and a mate had this loose competition that was firstly about making vodka. But then we thought vodka is a bit boring because you’re trying to take all the flavour out. And Corinna said ‘we drink loads of Negroni’s so why don’t we make a Negroni gin?’

“I started with a very traditional London dry recipe and then started to sub as many Australian botanicals as possible. We did about 15 recipes and recipe number six was the one, and when we showed it to friends and family they said ‘that’s some serious product’.”

A SLICK AND COOL BRAND

Following that the pair were close to having a site for a still after getting licensed to put one in to a pub in the inner west, but about two weeks before they were due to go in the owner sold the pub and everything had to be put back into storage.

They then got busy with life, focusing on their hospitality business in Waverley as well as knocking down and rebuilding their home and the small matter of having a child.

But Corinna explained, how they used this time to their benefit: “It’s given us a really good time that we didn’t go to market because we’ve really honed in on the IP of the gin. What took the longest was trying to get something to market that was Sydney-centric, but that hasn’t already been flogged to death.

“That was a really big thing for us, to get a brand out there that looks really slick and cool and something a bit more modern and that was probably what took us the longest.”

She added: “It’s really hard because you see so much stuff around you, that you are always questioning yourself ‘is that an original idea?’ So it took us a long time to get here, to get the name right, but I have so many plans for what we are going to do with Ester.”

And don’t forget this is a husband and wife team working together to create a product and create a brand while living their lives, working, parenting and without a big budget, as Felix said.

“It’s that really weird thing where we have gone into this on such a shoestring and with more passion than sense and with less money and we’ve gone out there and all these people keeping turning around and saying ‘it’s fucking awesome’. And then the World Gin Award really makes us feel it’s fully ratified and we feel like the brand has really arrived and we can start talking about some of the larger scaling we want to do.”

He adds one of the difficulties is that “the sales team is me, the distribution centre is me and the artistic control is Corinna. But everyone I show it to takes it.”

Corinna added: “That’s where we are lacking at the moment, in the marketing and projecting the brand, because the amount of awards Felix has won is such a short time is ridiculous and so that’s our last hurdle projecting that and really getting the gin out there.”

A PROCESS NOT A PROFILE

The pair are focusing on the on-premise at the moment, particularly in bars and restaurants, with Corinna saying “We’re not out to be obscure for obscure’s sake, but being in the restaurants and bars that we really love and admire and having them say ‘Ester is cool’ that’s a huge bloody honour for us.”

In terms of the actual liquid, Felix told Bars and Clubs: “London dry in itself is more of a process than a flavour profile. It’s when you put everything in the distillation and the only thing you add after the distillation is water. So you could style make a London dry classified gin with a contemporary flavour, but everyone says London dry as juniper forward with citrus.

“So for me as an old bartender this was about creating a gin that was going to work in every single gin drink. It has to be about juniper, then it has to be about balance across the palate with a bit of citrus at the end.

“We sit firmly in the classic, or London dry, category. It was also about creating a gin that we wanted to drink and that was that classic style. There’s some well-known gins in the style that are horrible as sipping gins, so it’s about using that style of gin and botanical profile but creating something that had enough balance and had enough elegance to be able to put it in a Martini and for it to work.”

Corinna adds: “The idea behind the dry gin though, and it does sound kind of unambitious, but it was to create the everyday gold standard gin of Australia. That’s what we set out to do. It’s the bottle reach for in your home bar, not the most obscure gin.

“I don’t think a lot of people have been trying to do that, I think they were trying to base the whole thing around one ingredient, or a story idea, or something like that. But for us we said we want to be that gold standard Australian gin that is your everyday drinking gin.”

It is a stunning everyday drinking gin, with a delightful citrus hit at the end and it’s very easy to see why it is grabbing the attention of judges around the world. Whether in a Negroni, a G&T, straight or a delightful Mandarin Gimlet, this is a gin that should be grabbing your attention. Head to the Ester website to find out more. 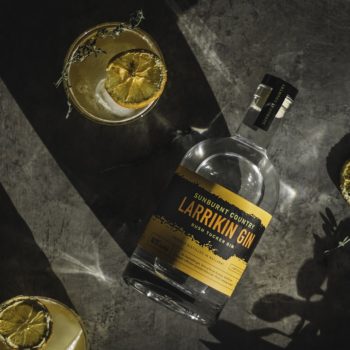 The perfect gin and tonic menu