“We all need to play a part in enriching society” When Jake Smyth (above left) started working in McDonald’s at 14 years old it was the start of a journey through the hospitality industry that now sees him driving a hospitality venue group into a new era as a result of the COVID-19 pandemic.

Smyth’s drive and desire for change is about much more than simply creating COVID-safe venues, although that is what the group is doing, it’s about creating a true joy in the industry and it’s about changing the future, beyond just this industry and making the most of the crazy times that we have all experienced so far in 2020. When you speak to Smyth you feel confident about what future of Australia’s hospitality industry.

“Australia is extremely lucky,” Smyth told Bars and Clubs, “But what that luck has a tendency to create is a sense of complacency. I think you see that in our Government’s preparedness for this, for the world’s preparedness for this. There are a lot of industries that have really become bloated and ours is one of them.

“When you really stop and think about the role and goal of hospitality, I think there are a lot of businesses and business models out there currently that are feeling the pain of COVID in a way, that if life had been a little harder over the last 15-20 years in Australia they wouldn’t be feeling it.”

Smyth said it was something they realised in Mary’s Group very early on.

“It’s one thing to open a successful hospitality company in the most explosive, dynamic and growth-led times in our game, ever. It’s another thing entirely to run a successful business through this period.

That’s the kind of passion the industry needs in these times and as much as this fight is important, Smyth adds, “There is a true joy to what we are doing”.

He also said while there are moments of joy and exhilaration about being where the group is there is also the brutal reality that the group has had to close one venue already in Mary’s Pitt Street and they are in negotiations regarding Mary’s Underground and there are significant challenges facing the group over the future of that venue.

“We’re balancing everything and being cautiously optimistic, but then at the same time we are opening fucking rooftops in the middle of winter and in the middle of a pandemic, in classic Mary’s style.

“This is what we’ve always done well. We’ve kept the cerebral along with the light-hearted. The serious matters of the heart and the world, we have always been attentive to but there is a real deep element of ‘oh fuck it, let’s just do it’ too.”

After researching the details of Sydney’s winter weather, Smyth realised that with average temperatures not dropping below 17 degrees and just 17 days of rain, now was the perfect time to open a rooftop bar and give people some sunshine and good burgers.

“The reality is, it’s 19 degrees today, and 19 degrees on that rooftop is fucking glorious. It’s a real success already, we’re busy, we’re full every day and turning tables.”

Smyth says the immediate success of the bar is down to two things, “one is Sydney loves a rooftop because we don’t have any and second people want to have a feel good story and they see this and say ‘good on ‘em, let’s go”.

He adds: “It’s also one of the best fucking burgers in the world and it’s on a fucking rooftop. Great. Simple.”

Looking to the future and the post-pandemic industry, Smyth says that while people will be looking for more risk-takers, no-one yet knows how much the world has changed.

“The world is upside down and spinning in reverse. I heard someone say that events like this cram 10 or 20 years of ideas on things that were going to progressively evolve in the future, into the now. It forces people to wrestle with the concepts now.

“I really, honestly feel that is absolutely happening. You can see it across so many aspects of society.

“Our corner of the world is small, but it is reflective of an attitude that is really pervasive in people right now, which is that they don’t want to go back to normal, they do want to try new things, they want it simpler, they want something honest and they want something that speaks to them and their community. And Mary’s has always been about its community.”

This is another area where Smyth’s passion rises to the fore.

“We’ve created this little communities, in little pockets of our wider industry based on ethical and moral standpoints that we really believe in. But we set it to the backdrop of cool music and fucking burgers. No pretension. But it is a moral and ethical standpoint that we make and I think if you don’t have this as the fucking core of your business in hospitality going forward you are going to struggle.”

An energy for the arts

The other aspect of the future for hospitality, particularly in Sydney, that Smyth hopes flourishes in the post-pandemic era is the arts and culture, and having these areas bring a dynamic to Sydney, similar to that seen in Melbourne for years.

“I already see a real energy towards the arts community happening. We have councillors and MPs talking about this, and they are talking about this now. I think any society that doesn’t value its art and its artistic input, or output, and invest in that, is dead.

“We are a long way from dead but it moves quickly and we’ll be a city full of medium and high density apartments with no character in 10 years’ time unless we pay very close attention and give it the support it needs now.

“Specifically within the hospo community now, it mirrors and it’s going to be very difficult for people to convince me, as a punter, to support them just because their chef is a good cook. There needs to be an investment from business people as well, and hospitality business people are a part of that.

“That luck and ease that our industry has had has come to end, across the world, because of this virus and it’s going to cause people to have to re-engage with something deeper and more meaningful and the punters will tell us, and I think they already are.”

Live music is back

“It was a very different experience to The Landsdowne having 300 sweaty kids spilling beer over themselves, but it was a lovely moment.

“But the arts are in trouble as they always are in Australia. But right now I feel optimistic, because I feel that right now people are hungry for art. It’s not until you miss it, it’s not until it’s gone and you realise the depth to which you take it for granted.

“People are fucking sick of sitting at home watching television. You ask anyone and they will say ‘I am sick of’. So people are now saying I choose to come and see live music, and it’s beautiful.

“I am an eternal optimist and I believe we are and we can create a different world. There is an element where a lot of us, including governments etc, had a sense over the last 20 years that we were just floating into a future that was not being written by us.

“I feel there is now a sense of empowerment where ‘I can do what? I can change what? I can be how? I can re-imagine?’ and I really, truly believe that we can write our own future and we don’t just have to take what is given to us and we deserve more than what is just given to us. Because the people who are giving it to us are just helping themselves and we all need to be fucking fed.

“I want a part of me fed and my kids fed that is deeper and wider than simply money and power and I think that this is a widely-held feeling that has been brought into the here and now and is within people’s grasp.”

That’s the kind of belief and passion that gives you confidence that this industry will bounce back from COVID, and from lockdown, not just stronger, but different, better and with a drive and belief that will become the new normal and we will all be enriched rather than beaten by the pandemic.

To enjoy some of the best world’s best burgers on a rooftop, head to the Landsdowne Hotel in Chippendale and enjoy! 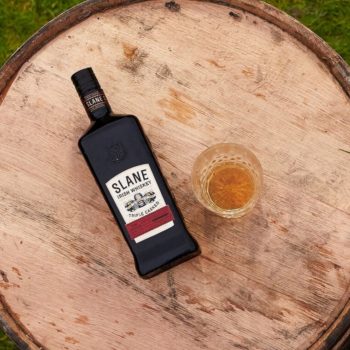