Esteban is a new tequila and mezcal bar, which opens in Sydney’s CBD today, from the team behind Tequila Mockingbird, and Bars and Clubs spoke to Executive Bar Manager Mark Crawford about what people can expect when the walk through the doors.

“We are split-level venue, so you go upstairs and you’ve got the restaurant, kitchen, big open flame barbecue. But you go downstairs and you’ll immediately see a large wall of tequila and mezcal,” Mark said.

“We’ve also got a couple of cabinets downstairs as well and we’ve got some of the more premium and cooler-looking bottles of tequila and mezcal in those.

“I would say the vibe we are hoping for downstairs is a bit of an underground, New York-style restaurant bar. So restaurant earlier in the day and evening, then later at night getting a bit darker and louder and becoming one of places that you want to stay locked inside of until after midnight.

“We want it to be a fun place, but also serving top quality food and drinks.”

The bar currently holds over 100 mezcals and over 100 tequilas, which Crawford admitted has been challenging in the current climate.

“I’m sure everyone is familiar with the holdups with stock in shipments that people can’t get their hands on, so it’s been pretty tough, but thankfully we’ve had quite a lot of time to be purchasing. Because we went into lockdown we weren’t able to open the restaurant so we tried to take positives from the situation and contacted as many people as possible, and we were just getting good news and bad news from suppliers.

“So it’s been pretty interesting, but it’s been easier to find a big selection of mezcal than tequila, which is great because I’m a huge fan of mezcal.”

What the delays do mean is that there are still more bottles on the way, although Mark said they had hoped to open with a bottle of Clase Azul Ultra Añejo in the bar, but it’s not here just yet. That will be available for around $300 a shot.

The restaurant will also feature a roving tequila and mezcal cart, as Mark explained: “We’ll probably be rotating the tequilas quite regularly that are on the cart, because that’s a great way to educate our staff as well.

While it’s not linked to the salt with the mezcal the bar is located in what was formerly Grasshopper Bar in Temperance Lane and Mark said co-owner of Atticus Hospitality Group, Michael Fegent really wanted to open a split-level restaurant and bar.

“We’d been on the hunt for a great underground space and as soon as we saw this, we really knew what we had to do with it. The Grasshopper was fun, and it’s a similar layout, but the fitout is gorgeous.”

The team have been working on the bar for 18 months, as delays with the fitout and then COVID have pushed the timetable back, but it’s open now and ready to welcome you to enjoy a taste of Mexico. 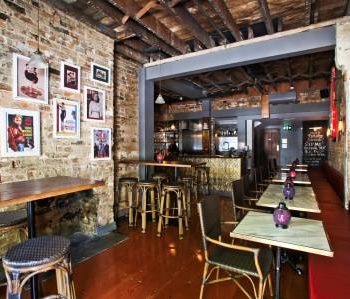