Melbourne bartender and owner of Byrdi bar has joined forces with Copenhagen based distillery and self-proclaimed ‘flavour company’, Empirical on its latest bottled cocktail.

The SAMFUNDSSIND cocktail is the latest in Empirical’s collaborative series, which has seen great success being sold in award-winning bars around the world such as Lyaness in London, and Electric Bing Sutt in Beirut.

As with the previous collaborations, Luke Whearty worked with Empirical’s research and development team member, Sasha Wijidessa, to create a unique recipe and his own desired flavour profile.

For the SAMFUNDSSIND cocktail, Luke chose Empirical’s core spirit blend, Ayuuk, as its base. This spirit blend uses Oaxacan Pasilla Mixe chillies which holds a smokey flavour. With this, Luke added a lacto-fermented mandarin liqueur, cold-brewed cocoa, kumquat to balance with the chillies earthy notes for a fresh, fruity and savoury tasting cocktail with notes of salted chocolate.

And what about the name?

Well, SAMFUNDSSIND, is defined by the Danish language council as, “putting the concern of society higher than one’s own interest”. ‘Samfund’ meaning society and ‘sind’ meaning mind.

The name sits well as part of the collaborative series as a percentage of the sale of each bottled cocktail is donated to the bartender’s chosen charity. Luke has chosen, Rural Aid, in support of Australian farmers who endure drought, flood and fire.

On the choice of name, Luke said: “[It is] especially applicable to the recent times we’ve found ourselves in globally and I believe it is the ideal of putting society ahead of one’s own personal interests and coming together as a community that is the key to weathering the storm.”

SAMFUNDSSIND is priced at €45, is recommended served over ice and has tasting notes of “Savory, Smokey, Citrus, Salted Chocolate”. It is available to order globally via the Empirical website.

Stockists in Australia include: 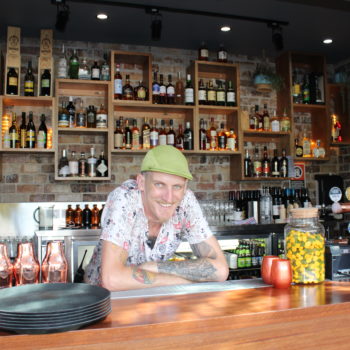